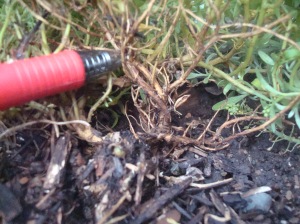 The abscisic acid present in the roots of this plant is extremely important. ABA is producedin terminal buds in preperation for winter. This slows plant growth and causes the plant to develop scales to protect the buds during the winter months. ABA is also very useful when the plant is under a lot of stress, such as decreased soil water potential. 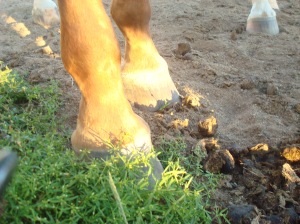 Adaptation of an animal

The horse hooves in this picture are an example of animal adaptation. Adaptations develop over many generations in order to make it possible for the animal to live a certain way and a certain place. Since animals depend on their physial features to survive these adaptaions help them obtain food, keep safe, withstand weather, etc. The horse hooves allow a horse to travel in uneven and rocky areas without injuring their feet. 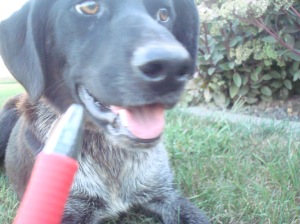 Amylase is an enzyme that breaks starch down into sugar and is present in saliva. The amylase assists in beginning the chemical process of digestion. The pancreas also makes amylase. In the pancreas the amylase converts the starch into glucose, providing the body with energy.

Anther and Filament of Stamen

The stamen is the male reproductive organ of the flower. Usually each stamen has a stalk called the filament. On top of the filament is the anther. Their function is to transport nutrients to the developing pollen. Generally a flower will have six stamens. 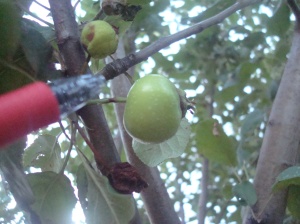 Angiosperms are flowering plants and are the most diverse group of land plants. Along with gymnosperms, they are the only extant groups of seed-producing plants. There are 3 characteristics though that seperate them from gymnosperms. These characteristics include flowers, endosperm within the seed, and the production of fruits that contain the seeds.

This flower is an example of an autotroph. Autotrophs are organism that ca make their own food. They do this by using carbon dioxide and photosynthesis. The process of photosynthesis allows them to convert water, carbon dioxide, and solar energy into sugars and oxygen.

Bryophytes are land plants that are non-vascular. They also have neither flowers nor produce seeds. Bryophytes were probably the earliest land plants and evolved from green algal ancestor. This group of simple land plants are well adapted to moist habitats, allowing avast majority of them to be found in Tropical America.

Cellulose is the major constituent of paper made of cotton, linen, and other plant fibers. Cellulose is the structural component of the primary cell wall of green plants and about 33% of all plant matter is cellulose. This organic compound is the most common on the earth.

The frog shown in this picture is an example of an ectotherm. An ectothermic animal is unable to regulate its own body temperature so it fluctuates according to its surrondings. Because of this they are dependent on environmental heat sources and have low metabolic rates. Many ectothermic animals will bask in the sun in order to regulte their body heat. 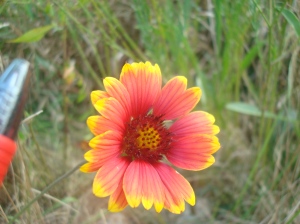 Endosperm is the tissue produced under the seeds of most flowering plants around the time of fertilization. It surronds the embryo and provides nutrition in the form of starch, making endosperm an important source of nutrition in human diet. Endosperms can also contain oils and protein. 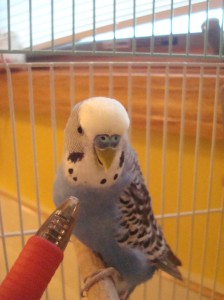 Unlike ectothermic animals, endotherms are animals that are able to regulate their own body heat. The body temperature of an endotherm is usually much warmer than the environment and stays about the same temperature. Mammals and birds, like the one in the picture, are endotherms. 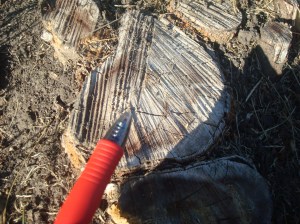 Heartwood is the central, woody core of a tree, that no longer sustains the tree’s life by conducting water. Usually heartwood is denser and darker than the outer sapwood. The cells of heartwood usually contain tannins or other substances that make it dark and fragrant. It  is mechanically strong , resistant to decay, and not easily penetrated. 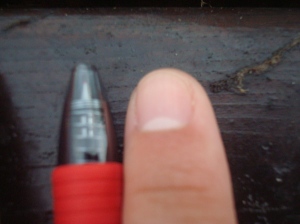 Keratin is the key structural material making up the outer layer of human skin, hair, and nails. Keratin monomers assemble into bundles to form intermediate filaments. These filaments are tough and insoluble. The only biological matter that is as tough as keratin is chitin. 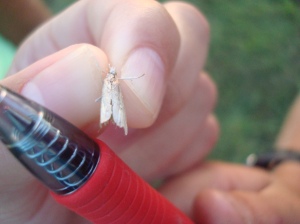 Lepidoptera is a large order of insects that include moths and butterflies and found virtually everywhere. Lepidoptera contains more than 180,000 species. These insects are characterized as being covered in scales, having two large compound eyes, and an elongated mouthpart. The larvae of these insects are called caterpillars.

The littoral zone is the part of a sea, lake, or river that is close to the shore. In coastal environments the littoral zone extends from the high water mark to shoreline areas that ar permanently submerged. In lakes the littoral zone refers to the portion that is less than 15 feet deep. This zone is home to most of the plant life because of the high amount of sunlight that is able to reach the plant. 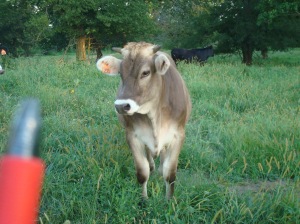 Mutualism is the way two organisms biologically interact. Through this each individual derives a fitness benefit. The example shown in the picture is the relationship between the cow and bacteria within their intestines. The bacteria produces cellulase, which helps digestion in the cow and the bacteia benefit from having a stable supply of nutrients.

Radial symmetry in biology is the balanced distributon of duplicate body parts or shapes. The seed carpels in this apple demonstrate radial symmetry. Many types of leaves also display this.

Stigma and Style of Carpel

An ovary, style, and stigma make up the female reproductive organ of flowering plants. The carpels are seperate or fused to form a pistil. The stigma is the part of the pistil which is receptive to pollen and the style is the slender stalk which typically connects the stigma to the ovary.

Thorns are modified branches with stems that have sharp, pointy ends. Generally thorns are used by plants to protect themselves from herbivores.  Thorns likely evolved as a defense mechanism for plants growing in sandy environments.

Xylem sap consists mainly of water and inorganic ions. The basic function of xylem is to transport water but it also helps in transporting nutrient throughout the plant. Another job of the xylem is to replace the water lost during transpiration and photosynthesis.

The term frond refers to a large, divided leaf. Fronds have a flattened blade which is supported by a stalk called the petiole. The fronds of ferns arise from the stem, or rhizomes. Fern fronds often bear sporangia and the sporangia are usually clustered into a sorus. Fronds may bear hairs, scales, glands, and sometimes bulblets.

This is a picture of a conifer leaf. The leaves of a conifer usually persist for several years. They are needle like and scale like. Many leaves are renewed annually but not all every year. The waxy surface of conifer leaves are helpful in preventing water loss. Conifers are known for surviving extremely high and low temperatures which allows them to grow in many regions of the world.

A pollinator moves pollen from the male anthers of a flower to the female stigma of a flower in order to accomplish fertilization. Most bees gather nectar and pollen to feed their young. During this process they transfer the pollen among the flowers while they are working. While the most common pollinators are bees; butterflies, hummingbirds, wasps, and others help in the pollination process. 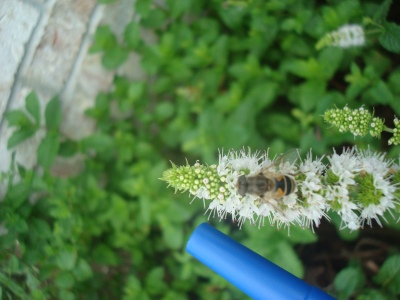 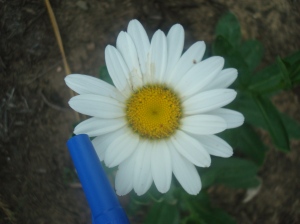 This is a picture of a deciduous leaf. Deciduous means falling off at maturity or tending to fall off. This term is usually used when referring to trees or shrubs that lose their leaves seasonally. The process in which deciduous plants lose their leaves is called abscission. Without the leaves the wind transmission of pollen improves and there is less breaking of the branches and trunk during ice storms. 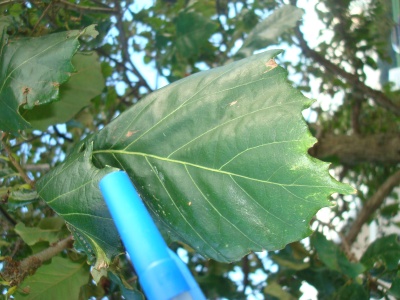 This picture is an example of a dry fruit. Dry Fruits are fruits in which the seeds are contained in a seed pod of some sort. The seed pod then opens to release the seeds. The outer covering of these fruits become dry while ripening. 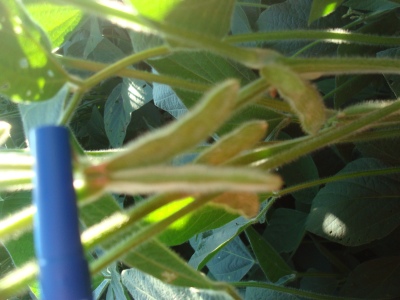 This plum represents a fruit – fleshy with seed. Fleshy fruits are formed from a single flower or a group of flowers. Fleshy fruits offer a “fleshy material” around the “stone.” Other examples of fleshy fruit would be strawberries, grapes, peaches, and more. 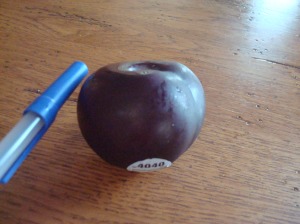 An exoskeleton is an external skeleton that supports and protects the body. This beetle is an example of an insect with an exoskeleton. Exoskeletons contain rigid and resistant components. These components help to perform jobs including protection, excretion, sensing, support, and feeding.  This hard outer covering protects from predators and pests. Exoskeletons contain chitin and when calcium carbonate is added it grows in strength and hardness.

Insects are a class within the arthropods. They have a chitinous exoskeleton, a three part body, jointed legs, compound eyes, and two antennae. The three – part body includes the head, thorax, and the abdomen. Insects are the most diverse group of animals on the planet and represent more than half of all known living organisms.

This worm is and example of a hermaphrodite. A hermaphrodite is an animal or plant that has both male and female reproductive organs. This enables sexual reproduction in which both partners can act as the “female” or “male”. Most plants, slugs, snails and some fish are hermaphrodites. 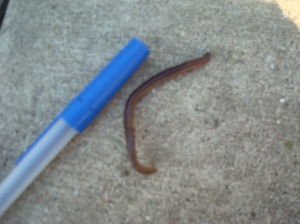 Inside the stem of a rose is the phloem. Phloem is the living tissue that carries organic tissue, such as sucrose, to all parts of the plant. The main job of the phloem is to transport soluble organic material made during photosynthesis. This process is called translocation. Without phloem plants would not get all the nutrients it needs in order to survive.

The cuticle layer of a plant is the non – cellular layer covering the epidermis of the green parts of plants. The cuticle’s job is to protect the plant against UV radiation, desiccation and physical, chemical and biological agents. It also provides some support for the plant. This layer of the plant has many of the same functions as our own skin.

This tee trunk represents a woody stem. Woody stems are covered by bark and have been growing for two or more years.  After the first two years, the woody stem thickens to help growth and increased circulation in the plant.

This plant is a dicot. This means that it is a flowering plant with two embryonic seed leaves. This sets them apart from monocots which only have a single embryonic seed leaf. The petals on dicots are in multiples of four and five, and their leaves have netted veins. Because of these aspects you can easily determine whether a plant is a monocot or a dicot. 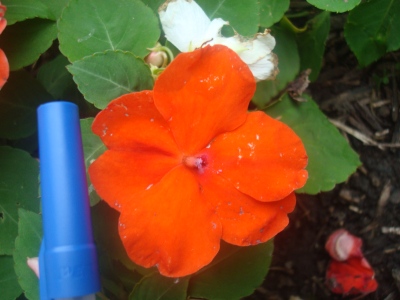 The tendril of a plant is  specialized stem, leaf or petiole with a thread like shape. These tendrils twine around whatever they touch in order to assist climbing plants in support and attachment. While they do not have a lamina or a blade, they can photosynthesize.

This butterfly represents an arthropod. Arthropods are invertebrate animals that have an exoskeleton, a segmented body and jointed appendages. They are separated from other invertebrates by their being bilaterally symmetrical and having a dorsal brain with a ventral nerve cord. The exoskeleton is formed partly by the limbs of the arthropod.

Lichens are composite organisms consisting of a symbiotic association of a fungus. Some lichens look like leaves and others, like the one in the picture, look like a crust. The main body of a lichen is called the thallus. They are important because they often times grow in places that are too hot or dry for anything else to grow.

This flower is a long – day plant or a plant that requires more than six hours of sun per day in order to form flowers. In the northern hemisphere these plants usually flower in late spring to early summer. Spinach, lettuce and other vegetables are also examples of long – day plants.

Welcome to WordPress.com. This is your first post. Edit or delete it and start blogging!